Galerija 11/07/95: Towards a Decolonial Memorialisation of the Bosnian genocide and the Holocaust

As Rebecca Jinks has recently argued, mainstream depictions of the Bosnian genocide in literature, art and museums of the former Yugoslavia have served to ‘replicate the representational framework of the Holocaust’. 1 Relying heavily on concentrationary imagery and neat categories of victim and perpetrator, Bosniak (Bosnian Muslim) writers and artists drew on, and at times appropriated, Jewish suffering during the Holocaust years to legitimise their own experiences of systematic violence and persecution at the hands of Croatian as well as Serbian forces in Bosnia and Herzegovina from 1992-1995. Yet these post-Yugoslav memory cultures, into which Jewish experience has paradoxically been subsumed, further marginalised the suffering of Bosniak victims by perpetuating a western European view of genocide as an exceptional, modernity-defining and exclusively concentrationary event. This paper examines the recent initiative of Galerija 11/07/95 – the first memorial gallery in Bosnia- Herzegovina – to commemorate the 25 th anniversary of the Srebrenica massacre, in which 8,000 Bosnian Muslims were murdered, in conjunction with the Holocaust. As part of this initiative, the gallery publicly invited ‘all museums, galleries, cultural and other similar institutions’ to participate in the multidirectional memorialisation of the Bosnian genocide by installing the Bosnian photographer Tarik Samarah’s 2004 artwork ‘1945 – 1995 – 2020’ on ‘the exterior or interior of the museum/building in the form of a billboard, poster or photo projection’. 2 Showing a mother from Srebrenica apprehending an image of Anne Frank and her sister outside the Anne Frank House in Amsterdam, Samarah’s photograph links the respectively Jewish and Bosniak victims of mid- and late-twentieth century genocide, yet does so via invoking a central figure of western European cosmopolitan memory. In the paper I investigate Galerija 11/07/95’s initiative as an example of the ways in which post-Yugoslav museum practice in Bosnia has attempted to resist the colonial memorial structures of western Europe, and consider the extent to which these efforts successfully represent the distinct genocidal experiences of Jewish and Bosnian Muslim minorities. 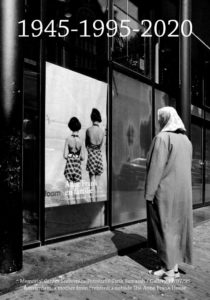