I want to be white for you. Curating an Exhibition on Ethnic, Religious and National Distinctness in Polish Contemporary Art, Studio BWA Wrocław, 2010

The presentation will discuss the exhibition which took place a decade ago in Wrocław, at Studio BWA (22 October - 10 November 2010) and accompanied the conference organized, under the same title, by the Institute of Art History at University of Wrocław. It was a reflection on ethnic, religious and national distinctness and the possibility of cultural dialogue in a homogeneous society, with emphasis on contemporary Poland. The exhibition included the works of artists who, in their work, explore that issue at varying levels. The following artists from diverse cultural, artistic and generational backgrounds were invited to participate: Rahim Blak (Krakow), Hubert Czerepok (Wroclaw), Tomasz Malec (Lublin), Julia Zborowska (Krakow / Vienna), Andrzej Kwietniewski (Lodz), Jasmina Metwaly (Poznan / London / Cairo), Dominika Łabądź (Wroclaw). The title I WANT TO BE WHITE FOR YOU was taken from the refrain of the song sung by Reri – a beautiful dark skin star from Tahiti who appeared in the Polish film "Black Pearl" in 1934. From today's perspective her performance in the film does not fall within any framework of political correctness. The title, inspired by the song and the backstage history of the heroine, is symbolic – it provokes a consideration of how to evoke egalitarian dialogue between the minority and majority, on coexistence and cohabitation, which would result in a synergistic effect of enrichment on both sides instead of damaging dependence. Reri's utopian desire to become white with bright eyes and unite with her white ideal, is replaced with the utopia of a harmonious existence "next to". Questions about the preservation of cultural identities of ethnic minorities present in Poland, and about tolerance and openness of Poles to others are still valid. These problems are presented not only by the multicultural artists but also by Polish artists who are careful observers of changing realities. 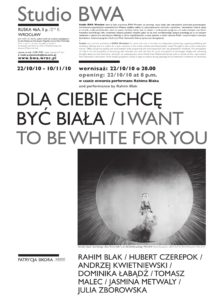 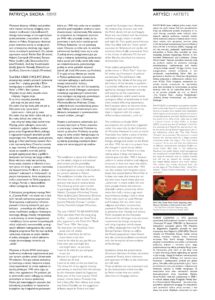 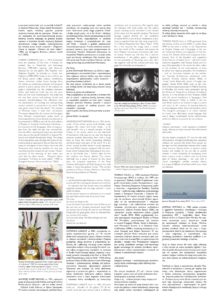