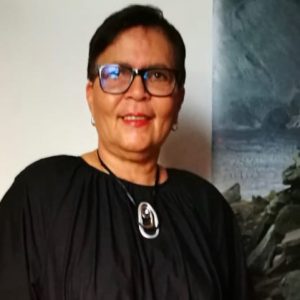 Cynthia Schimming is an internationally renowned fashion designer and clothing technologist from Namibia. In 1998 she was awarded a Laureate by UNECSO for the exceptional quality of design on the theme 'A United World for Future Generations: Beyond time, beyond Oceans’.  In 2019, she was awarded the lifetime achievement award at the Katutura Fashion Week. The same year, she was a guest researcher at the Ethnologisches Museum Berlin studying the histories, materials and techniques of the Namibian collection. In this process, she created an artwork for the Humboldt Forum which not only tackles colonial violence and genocide but also understands the collection as archive of Namibian arts and crafts, interweaving historical experiences with a self-confident repositioning in the postcolonial present. After her research and work at the Ethnologisches Museum in Berlin she went home for a while and then she went back to Hamburg, where she was the costume designer for  “Hereroland”  a play Directed by David Ndjavera and Gernot Grünewald, based on the Herero genocide and the German Herero History, at the Thalia Theatre Hamburg.